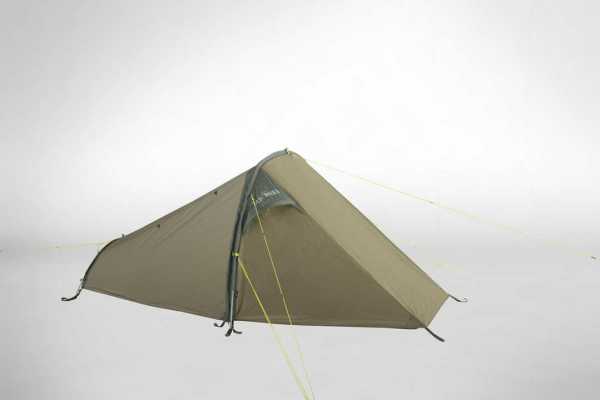 Koli was designed for one person plus luggage. Thanks to a second frame arch, there is even plenty of room for well-built campers to sleep in comfort. The inner tent is already suspended from the outer tent, but can very quickly be taken off. This is much appreciated when there is the threat of rain because it remains dry when assembling and dismantling.

Tatonka is in fact a family company in Bavaria, now meanwhile in the second generation. The founder of the enterprise, Winfried Schechinger, recognized very early that in Germany and Europe there was a growing market for outdoor products and in 1980 he had already set up the company Mountain Sport GmbH for the sale of sport articles. In 1993 the trademark Tatonka was created and the company changed its name to Tatonka GmbH. The idea for the trade name arose from the film "Dances with Wolves", a film which remains popular today. In the language of the Sioux Indians, indigenous to North America, the bison is known as "Tatonka" and is a symbol for peaceful living in harmony with nature, but also for its usefulness to man. As a brand name it was soon to become unmistakable. Schechinger’s decision not only to establish a new brand but also to build up his own production plant in the 1980s, proved to be the key to success of the company. The factory in Vietnam is today regarded as exemplary.In 2011 Tatonka was certified by the TÜV Rheinland as a fair, environment-conscious and responsible employer in conformity with the social standard SA8000 and in 2012 was verified by the non-profit organization MADE-BY as having achieved to 100% the specified social standard. Since 2011 interested outdoor fans can see for themselves under www.openfactory.tatonka.com the conditions under which the high quality Tatonka products are produced. Only adult employees work here and they are paid good wages and the social standards are high and approved; for example there is a company canteen and a first-aid station. The company’s own power generators allow freedom from the fluctuating power supply in Vietnam as a land of monsoons. The wet-room provisions for the electro-installations are in conformity with the German norm standards for work and operational safety conditions. Top products, extremely reliable production to high standards of quality, fair partnership dealings with outdoor and sport retailers together with employees who are proud of the graphic significance of their company brand have all contributed to bringing the Tatonka label to the strong position which it enjoys today. Tatonka GmbH has been certified as an “Authorised Economic Operator” (AEO - Authorised Economic Operator) of the European Union for “Customs Simplifications/Security and Safety” (AEO-F). The successor generation of the Schechinger family is also intrinsically linked with the Tatonka company. The two sons of the company founder were aware at an early age that they would take over responsibility for the company. Since the end of November 2004, Andreas Schechinger, the son of the founder, is the Chief Executive Officer of Tatonka GmbH. With globetrotter equipment he served an apprenticeship and since 1991 Schechinger is involved in the product development department of Tatonka. Today he is the Vice President of the German Association of the Sportartikel Industrie e.V. (BSI) and is Chairman of the Specialist Board for Outdoor (FGO). Markus Schechinger was trained at a major Munich-based outdoor gear retailer and today works in the sales & marketing department of the company.

Ultralight & ultra-packable for mission-driven trips & the freedom to tackle it all.

Extra durability, privacy and comfort for camping and backpacking soloists.

Extra durability, privacy and comfort for 2 campers or backpackers.

waterproof Tarp, very sturdy despite small pack size, usable as bivy bag, can be coupled with a second Stasha Tarp

The Bunker by Snugpak ® is an iconic three-person dome basecamp and expedition tent, designed for robust semi-permanent shelter when exposed to prolonged severe weather elements

Featherweight, all-season protection for parties of four on alpine missions.

The Scorpion 3 by Snugpak ® is stalwart three-person base camp and expedition tent, when a semi- permanent camp is required

The ultimate shelter for long-distance soloists.

Adds full protection against wet and buggy terrain for your Front Range Shelter.

Water filter that can save lives, whether on land or on water

Extra durability, privacy and comfort for 3 campers, at a great value.

The Tactical 3 is one of our most sought-after sleeping bag ranges, using state of the art fabrics to keep you dry, comfortable and warm

Comfort and durability - these are the characteristics that distinguish the WOODSMAN shirt and guarantee that it will serve bushcraft and outdoor enthusiasts reliably for a long time.

The Woodsman Pants were specially developed for bush and outdoor enthusiasts.

The Mk.II Operator Combat Pant puts an emphasis on fit as well as versatility.

The 5.11 Rush 100 backpack impresses on long outdoor tours and in action.

The HALIFAX® medium backpack is a fully mission-configurable patrol pack.

Ultralight & ultra-packable for mission-driven trips & the freedom to tackle it all.

The Tactical 3 is one of our most sought-after sleeping bag ranges, using state of the art fabrics to keep you dry, comfortable and warm

High End Compass, allows you to find the target faster

Hammock made of sturdy parachute nylon, with side-mounted packsack