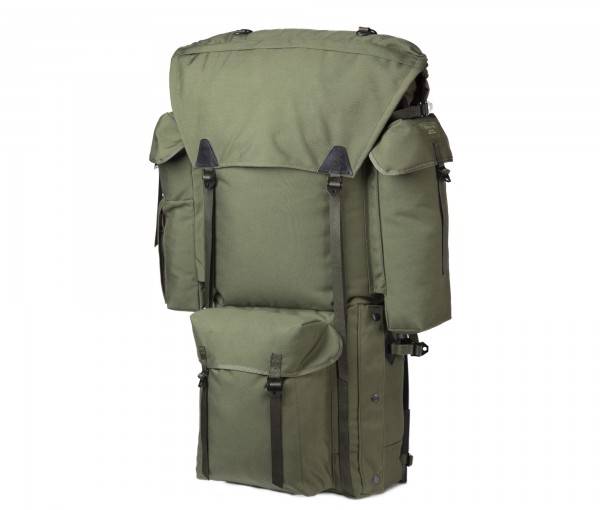 The special rucksack designed for the paratroopers of the Finnish Defence Forces has also gained popularity among recreational hikers over the decades. This rucksack designed for heavy-duty military use resists, due to its materials and structures, tougher handling than most of its users, such as a free fall from an aircraft. In view of its properties, LJK also suits average users and it is an excellent choice for those seeking a lifelong partnership.

The LJK rucksack was launched in 1985. Originally designed for military use, the rucksack was also warmly received among civilian users. The special features of the model include a frame without the top curve, which makes moving easier since it does not get in the way of the head. There are no pockets on the sides of the rucksack in the bottom section, which makes cross-country skiing with the rucksack more comfortable. The LJK rucksack is still used in the Finnish Defence Forces today and it is equally popular among recreational users.

A traditional external frame rucksack is at its best with a heavy load but is equally suitable for lighter outings as well. The external pipe frame allows air circulation between the bag and the back of the user, reducing the heat load significantly. Although anatomical rucksacks have taken over some turf in the rucksack market, there are still situations where nothing beats an external frame rucksack.

Compartments
The top compartment of the bag (dimensions approximately 45 x 40 x 20 cm) is closed by tightening the drawstring opening which is secured with a waterproof protective collar which enables overpacking as well. The opening is covered with a generously sized flap which is secured with straps. The straps are long enough for carrying, for example, a sleeping bag or mat under the flap. When necessary, the straps can be easily extended with the supplied detachable straps. The top and bottom compartments of the bag are separated by a built-in divider.

The bag’s bottom compartment (dimensions approximately 35 x 35 x 20 cm) opens on both vertical sides with a zip. The zips are protected with a press stud flap. The flaps should always be fastened carefully because they take some of the weight and strain off the zips.

The side pockets (dimensions approximately 40 x 10 x 7 cm) are closed by tightening the waterproof protective collar which is covered with a flap that can be secured with straps. The left side pocket is divided into two compartments with a built-in divider. The lower compartment is accessed via the side zip.

There is a large outer pocket (dimensions approximately 32 x 25 x 10 cm) in the lower back, which is closed by tightening the protective collar. The pocket is covered with a flap secured with two straps. This pocket is ideal for packing items that need to be easily reachable during the hike, such as a camping stove and food.

Other attachment points
There is a generous number of attachment loops on top of the flap and inside the main compartment. With these, it is possible to tie even large loads (such as the beloved Sissi tent) on top of or under the flap securely by using detachable straps. The loops on the inside of the flap are perfect for attaching a sleeping mat. Especially a military-style tent mattress can be very conveniently attached to these by its elastic bands.

The bottom corners of the shoulder straps have loops which act as attachment points for small items, such as water bottles.

Carrying system
The frame of the carrying system is the strong aluminium pipe frame of the LJK model. Contrary to civilian rucksacks, LJK does not have an upper curve because the curve gets easily in the way of the head when it is necessary to move in rough terrain. Furthermore, the frame of LJK has been reinforced with additional support blocks. The shoulder straps and hip belt are firmly padded and anatomically shaped. The buckle of the hip belt can be undone very quickly with one hand. It is a very valuable feature in a possible emergency situation. The buckled chest strap provides extra comfort and support for carrying.

The continuously adjustable (in length) supportive carrying system and hip belt of the rucksack can be adjusted to suit users of all different heights and sizes. It is possible to adjust the centre of gravity of the shoulder straps even while walking by tightening and loosening the straps attached to the top of the frame. The centre of gravity of the rucksack itself between the shoulders and the hips is adjusted by loosening and tightening the shoulder straps and hip belt.

Finn-Savotta Oy has manufactured trekking equipment, backpacks and tents for over 50 years. Established in 1955, this family enterprise has designed and manufactured products for professional and amateur outdoorsmen and women to use in demanding conditions.

We base our operations on sustained, customer-oriented product development work. In addition to our sewing department, we have a small metal department where we make our frames for backpacks, pipes for tents, as well as sleds and snowshoes.

All of our products are handcrafted and tested in real-life situations. As a result of producing hundreds of thousands of products, our extensive experience makes us a highly reliable partner.
The Finnish Defense Forces has granted our company the ISO-9001-2000 and AQAP 2210 certificates.

is an improved model of the Border Patrol rucksack, designed for the Finnish Border Guard

Weighing a mere 1 lb. 4 oz, defy the cold and rest better while moving through the mountains with the Hyperion.

The ultimate shelter for long-distance soloists.

Tactical 85l backpack made of Cordura with useful pockets, slide-in compartments and FAS Plus system.

Tactical 45l backpack made of Cordura with useful pockets, slide-in compartments and FAS Plus system.

Tactical 45l backpack made of Cordura with useful pockets, slide-in compartments and FAS Plus system.

Medium sized backpack 25l, has a wide selection of camouflage and colors, which also makes it suitable for hunters and outdoor fans.

reversible jacket in the style of the classic US aviator jackets

is made out of aluminium and plastic sheet

Perfect for backpacking and trekking in cold but dry conditions

As efficient a bag as it is possible to make

Whenever light warming layer is needed and fleece is not up to the task, it’s the Wolfound to the rescue

Multicam swimming trunks, the hidden inside pockets securely stores documents or money at any time.

Coffee press, absolute MUST HAVE for all coffee lovers