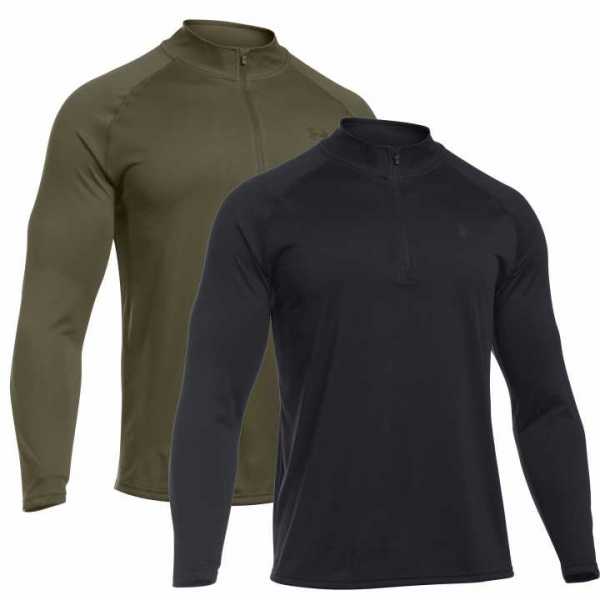 For the hot days and indoor. Keeps you cool, dry and light. The HeatGear® functional clothing directs the moisture away from the skin, providing a pleasant cool comfort. With the HeatGear® products to stay in the game, even when the temperatures rise.
Under Armour ® Tech TM fabric with an ultra soft natural feel for unsurpassed comfort. Moisture Transport System wicks away the sweat from the body. The anti-Or technology prevents the growth of microbes, thus preventing the formation of odors before.

Under Armour ® Tactical
Clothing of Under Armour ® Tactical series differs not only optically from the regular Under Armour Sport Line series.
The following characteristics are observed:
1. logo in the same color as the garment.
2. Much of the Under Armour Tactical Series is also available in "tactical colors" olive green and beige.
3. ArmourBlock TM technology (except jackets) integrated in all garments,
i.e. Microbes are neutralized before they can cause odors.
4. The sizes are adapted to athletic body and therefore usually available up to size 3XL.

Under Armour began with the goal to build a better T-shirt. Founder Kevin Plank, a former University of Maryland football player, grew tired of constantly changing his sweat-soaked shirt during two-a-days. He dreamed of athletic wear that could work with the athlete, regulate body temperature, wick sweat and provide compression. In 1996, his dream became reality. He worked out of his grandmother’s basement crafting revolutionary performance gear. Under Armour quickly outgrew the basement. Now the company provides the performance gear that keeps athletes warm in cold weather, cool in hot weather and comfortable all year round. With its moisture-management technology, design that fits closely and comfortably to the body, and temperature-regulating features, the company mission looks beyond making a better T-shirt. Under Armour aims to make better athletes.

Under Armour Tactical was founded to bring serving Armed Forces and Emergency Services the most functional, comfortable and performance enhancing clothing and footwear after the success of their parent brand UA proved a huge success with their sporting base layers and shoes. Utilising key technical features like HeatGear and ColdGear along with synthetic fibres to provide either cooling or insulation and moisture wicking synthetic fibres to keep the skin dry; the Under Armour Tactical collection of clothing is as functional like the sports gear but is optimised for use with military and combat gear. Including the best-selling baselayer tops, shorts and leggings the UA Tactical range includes other training and gear such as military boots, sunglasses, shirts, pants and even protective combat gloves to ensure they compliment the rest of your load-out with maximum effect.

Slight, breathable and buttoned shirt with air vents on the back.

Slight, breathable and buttoned shirt with air vents on the back.

Under Armor Microthread technology, the fabric dries faster, does not stick to the body

The fabric dries fast to keep you cool

Waterproof protection and rain cover not only for wet conditions.

It is designed for tactical use in extreme weather, extremely high insulation

shooting gloves provide evaporate cooling when the heat is on with a fully ventilated design - breathable mesh combines with a perforated 0.6mm palm to allow cool air in and circulate throughout the glove

This Combat Shirt is particularly suitable for wearing under protective clothing, velcro and pocket on the sleeve

Large basic accessories and lid pouch for many rucksack models

This Combat Shirt is particularly suitable for wearing under protective clothing, velcro and pocket on the sleeve

Comfortable Tactical Tee with velcros on both arms

The shirt is based on our classic MBDU shirt. It is made of lightweight, yet durable fabric it provides proper antibacterial properties even during prolonged use.

Classic Army is a fleece jacket designed as medium insulation.

The Ranger Combat Shirt from pentagon is specially tailored for use with ballistic protective vests.

Light jacket with document pocket and ventilation system on the back.

Breathable and hard-wearing combat shirt made of high quality fabrics, with zip pockets on the shoulders.

Loose fit shorts, the stretch waistband with drawstring leads for a perfect fit

Softshell Jacket with warming fleece surface on the inside

To load smartphones, cameras and tablets

Classic M65 Jacket in a new version for covert operations